“It will be as God Wishes”

This article was published in the magazine “Pratham Pravakta” (India), May 2017 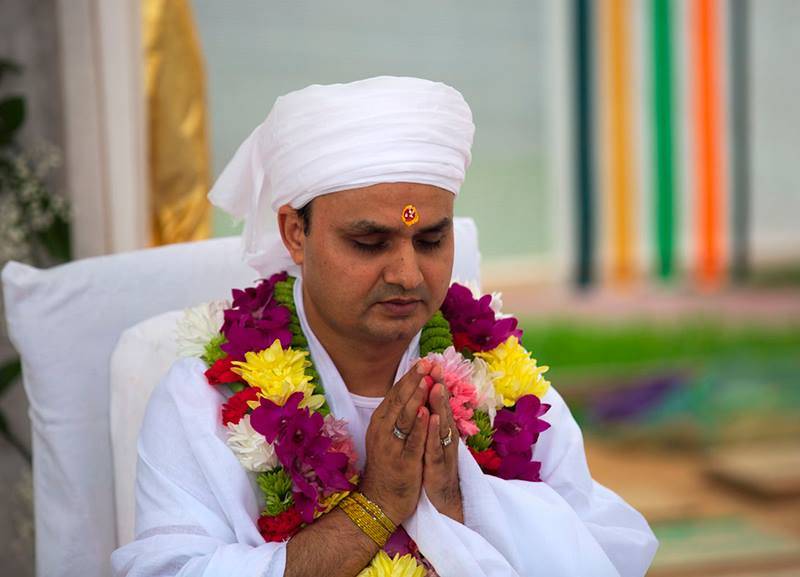 Shri Prakash Ji was born on 11 December 1970 in Patna, Bihar. At one point in history this ancient city was a flourishing Pataliputra, a capital of empires. It has long been known for giving birth to spiritual luminaries like Buddha and Mahavir, who went on to spread the message of Sanatana Dharma (sanskr. eternal spirituality), which is translated as eternal religion, and is a synthesis of religious, philosophical, mythological and ethical concepts. It emerged on the banks of the river Indus, known in Sanskrit as “Sindhu”. The main message of Sanatana dharma is that every being must be treated with respect, as everyone has a particle of God within them.

Shri Prakash Ji’s family belonged to the original kulin Brahmans. Since childhood, he was brought up in the spirit of Santana Dharma, and realized from a young age it’s deep meaning and importance. The Vedic traditions and practices were followed from generation to generation. His mother was a deeply religious woman, and was the first person who introduced him to Hinduism. His father was an engineer, but never forgot about the spiritual side of life. The faith and respect that he had in his heart for the religion went on to become both the source and the purpose of his life.

At the time of his youth, the most sought after professions in India were that of a doctor or an engineer. The two options were laid out before a young Prakash as well, and his father advised him to pursue medical studies. The reason for it being the connection that he saw between the Vedic tradition of Ayurveda, yoga and the novelties of modern medicine. And Prakash Ji wanted to explore that.

But destiny had something completely different in store for him. He was going to pursue his higher education a thousand kilometers away from his homeland. While reading various newspapers and magazines, Prakash Ji’s father always read all the issues about Soviet Russia, and was sure that his son would get the best education there. His work with soviet engineers also had a great impression on him. He left for Russia in 1990, a country that was soon going to become his second homeland, and a place dear to his heart. He also met his future wife while studying in Moscow, and has three children who were born and raised in Russia, which only strengthened the born that he felt with this country.

The 1990’s were undoubtedly a breaking point in the history of Russia. This period was dubbed “perestroika” or restructuring. The long known stability was tottering beneath everybody’s feet, and a new world was emerging. Russia had been a communist country for 70 years. Censorship was rife and atheism, a part of the ideology. During “perestroika” everything characterizing the previous regime fell in a matter of couple of years. Suddenly an influx of most varied and previously banned material hit the country like a wave. Everything from banned history books to works on esoteric science could now be easily accessed. It led to a lot of confusion created in the minds of people, who were now divided between the past, with its predictable march of time, and the present, full of chaos, with an unknown future before them.

During the same period, Prakash Ji was in his third year of studies in Moscow, when he felt that he was not in the right place, and began to go deeper into himself. This soul searching made him realize the true purpose of his stay in Russia. The purpose was to share with people the true knowledge that uncovered itself to him through his spiritual practices. This period was a hard one for most of the people, both materially and mentally. Those who earlier enjoyed a good lifestyle, now had to work their way up all over again. One can only imagine the difficulties that a young student from a foreign country had to overcome to ensure for himself a steady source of income and a living. In this case the purpose was a lot bigger and therefore was fraught with a lot more obstacles. Despite all of that, the determination that was kindled in the heart of Prakash Ji because of a new found purpose gave him the strength to move forward. He decided to leave his studies to go for that calling wholeheartedly. Years of struggle ensued, and life showed its numerous facets. Finally, in 1999, the struggles bore their fruit. A spiritual and cultural center was opened in Moscow. Through it, Shri Prakash Ji’s initial vision was fulfilled. He preached about the wisdom of Hinduism, its importance, and how it’s ideals and practices can be fused with the realities of ones everyday life in the modern world.

Shri Prakash Ji’s work and message has been spreading continuously ever since. In Russia, he found his first disciples, who strive to follow the spiritual path shown by their master. Apart from Russia these centers are open in other parts of the world as well : Ukraine, Lithuania, Germany, UK, Kazakhstan. As of lately, a lot of work is being carried out to develop such a centre in India as well.

It is no exaggeration to say that a person who makes it in Russia, can make it anywhere else in the world. The fact that Shri Prakash Ji’s work has been going on continuously for 26 years in a country where for a big period of time religion and spirituality were deemed obsolete, and the ideology of communism, which was materialistic in nature, declared to have the ultimate authority, this seems to be a towering achievement. Today, Russia is a predominantly orthodox Christian country, with about 75% belonging to the orthodox Christian denomination. There are for major religions in Russia : Christianity, Islam, Judaism and Buddhism. Hindus account for 0.1% population of Russia. Even so, the interest in Indian culture and religion has never really faded, but increased in the recent times. There are people who give the same amount of love and respect to Prakash Ji that he give to them, and understand the value of knowledge shared by him. At the same time, there are such elements present in the society who are completely unhappy with such a matter of things. In fact, they are adversely opposed to the idea of the rise of Indian culture and its practices in any form or way.

One of them happens to be A.L Dworkin, a former clergyman of the Russian Orthodox Church. On one of his blogs named after the revered Saint Ireneus, he has been carrying out the most lowly activities. Primarily, his job consists of sullying Hinduism, and everything and everyone who belongs to it. For the past one and a half years, he has chosen Shri Prakash Ji, and has been throwing mud at his image, work and family every time he gets a chance. The slandering had reached such a level, that it was necessary to take legal action against him. He had used all methods to cause disturbances in the work of Shri Prakash Ji. He payed various TV channels to air twisted information about him on the news, and tried to hire witnesses who were apparently damaged by Shri Prakash Ji to testify on his side. The latter of his goals has failed miserably. It is safer to lie and bring someone down sitting behind a keyboard, than to appear before a judge to do the same. Dworkin also happens to be the president of anti-cult organization affiliated to the Russian Orthodox Church.

What is perplexing is that these misdeeds are being carried out with the blessings of the Church. No one has a monopoly on truth or what a person should believe in. Therefore religious acceptance is a must, especially in a multi-religious and multi-ethnic country. But even though Hindus are in a minority, Shri Prakash Ji considers his duty to defend it and preserve its respect. Hinduism has never been a religion that took to war and violence to protect itself. It believes in the power of ahimsa, non-violence, and historically has shown the wonders that a nation can reach through that.

Shri Prakash Ji often says “The aspiration that unites all religions is the spiritual growth of every individual, through the purification of their mind, soul and body. I often say that the ritualistic part of every religion is important, but one must not get caught up in ritual alone. Spiritual growth is more important. We cannot confine God in a frame. One must first break the frames and barriers in ones own mind.” The harmonious coexistence of various religions in their diversity is Shri Prakash Ji’s message.

Since the time of the opening of the first Indian spiritual and cultural center in Moscow, there have been quite a lot of hurdles on the path of Shri Prakash Ji. But it always takes time for something worthwhile to shine through. All these struggles have only brought on the surface the work that Shri Prakash Ji carried out quietly for 26 years. One can say, that despite all of the difficulties, the initial aim of the mission has been fulfilled. Those who approached Shri Prakash Ji, have always been met with open arms, and the teachings of the Master have spread understanding and awareness about spirituality among those who were ready to perceive the given knowledge and learn more not only about the culture and practices, but about their inner selves.

The story of Sarasvati
Scroll to top